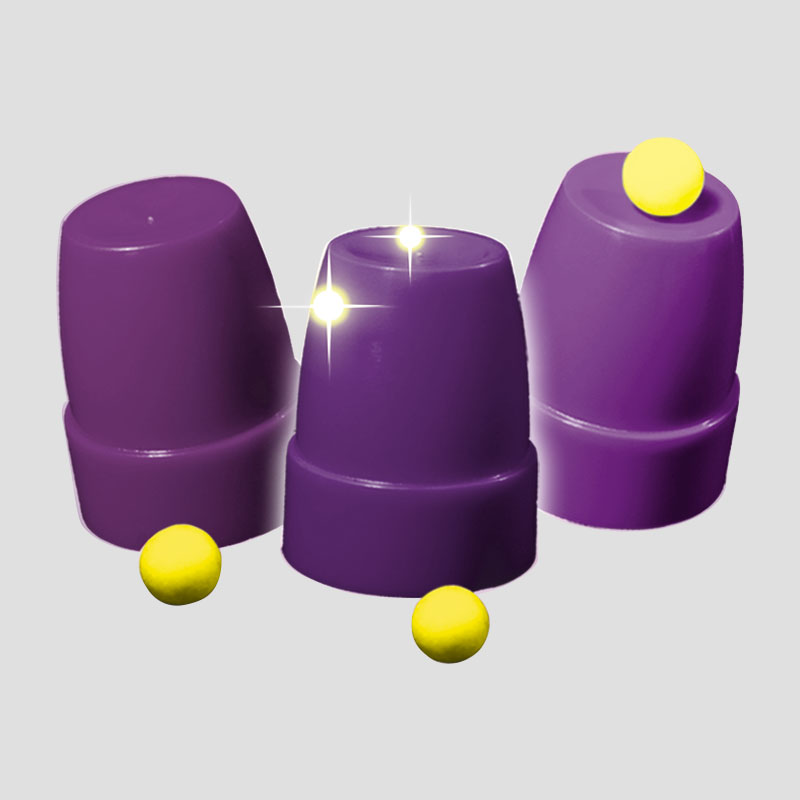 The trick consists of three cups and four pom-poms; however, the audience will only be aware of three pom-poms. Before your show, put the three cups on your table with each mouth facing upwards. Put one cup on your left, one cup in the middle and one cup on the right. Now, put the middle cup inside of the one on the left. Then put one of the pom-poms into the mouth of the cup. Next, put the cup on the right inside of the mouth of the top cup. Then put three pom-poms into the mouth of that cup. When you are ready to perform the trick, hold the stack of cups in one hand, keeping all three cups together in the stack, and then tip the whole stack over (make sure the stack stays together) so that the three pom-poms fall out. Now, line up the pom-poms in a neat row on the table. Now hold the stack mouth-upwards in one hand, and with the other hand pull the bottom cup off of the stack. Make sure that you hold the mouth of the cup towards yourself as you remove it from the stack so as not to let the audience see inside of it and then turn the bottom cup over completely and place it mouth down onto the table directly behind the left pom-pom. You will now do the same move with the next cup on the bottom of the stack, but you have to be extra careful not to let an audience member see inside the cup or they will see the hidden pom-pom. Make sure you keep the mouth of this cup facing toward yourself as you quickly, in one smooth move, turn it over mouth down on the table and place it directly behind the middle pom-pom. You will have to practice this move to make it smooth so that the hidden pom-pom doesn’t drop out where people can see it, but instead stays hidden inside of the cup as you put the cup mouth downwards on the table. NOTE: Remember, the audience is not supposed to know that there is a hidden pom-pom underneath the cup. Now turn the last cup over and place it mouth downwards onto the table directly behind the right pom-pom. It is important that you turn each cup over in the same manner, always making sure that the mouth of the cup being turned over is facing you and not the audience. 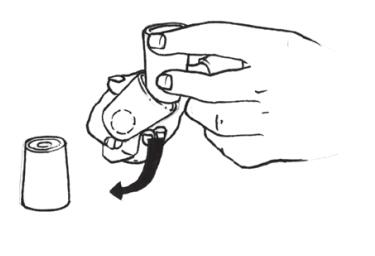 You are now going to do the same basic moves as you did before. First turn the entire stack over, mouth-upwards. Once again, pull the bottom cup off and place it mouth downwards on the table next to the single pom-pom that was just revealed. Then, take the next cup from the bottom, turn it over, and place it on top of the single pom-pom that was just revealed. This is the cup you want to be most careful with because it is in this cup that the extra pom-pom is concealed. Remember, the audience doesn’t know about this pom-pom! Now, turn the last cup over and place it to the right of that cup. Now, take one of the two pom-poms left on the table and place it on top of the middle cup. Now, place the cup on the left on top of the middle cup and pom-pom and then place the cup on the right on top of the stack. Tell the audience that you are going to make the second pom-pom join the first. Say a few magical words and then lift the whole stack up from the bottom as you did before. You will now see two pom-poms! 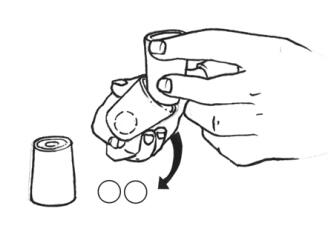 Now turn the entire stack over again, mouth upwards. Once again, take the bottom cup, turn it over and place it to the left of the two pom-poms that were just revealed. Carefully remove the next bottom cup with its hidden pom-pom and turn it over and place it on top of the two pom-poms. There will now be three pom-poms underneath that cup but the audience will think there are only two. Finally, turn over the last cup and place it to the right of the middle cup. For this part of the trick, you will stack the cups a little differently than you did before. Tell your audience that you will make this third pom-pom pass through two cups instead of just one. Now place the cup on the left on top of the middle cup, place the last pom-pom on top of the stack, and place the third cup on top to complete the stack. Make a magic gesture and lift the whole stack up holding them from the bottom cup and you will see all three pom-poms!

You could end your routine with the last trick or you can add a really spectacular finale. Do the trick exactly as you did the last one, but after showing three pom-poms under the cups turn the cups mouth upwards again. This time the bottom cup has the hidden pom-pom in it. Turn this cup over carefully and place it on top of the three pom-poms on the table. Turn over the bottom cup next, place it to the left of the cup with the pom-poms, and then place the next cup to the right of it. Now, tell your audience there is an invisible pom-pom in your pocket. Now, make believe you are taking a pom-pom out of your pocket and place this invisible pom-pom on top of the middle cup. Then, place the left cup on top of it and the right cup on top of it to complete the stack. Make a magic pass or say your favorite magical words and when the cups are lifted there are now four pom-poms under the cups and everything can be handed out for examination!