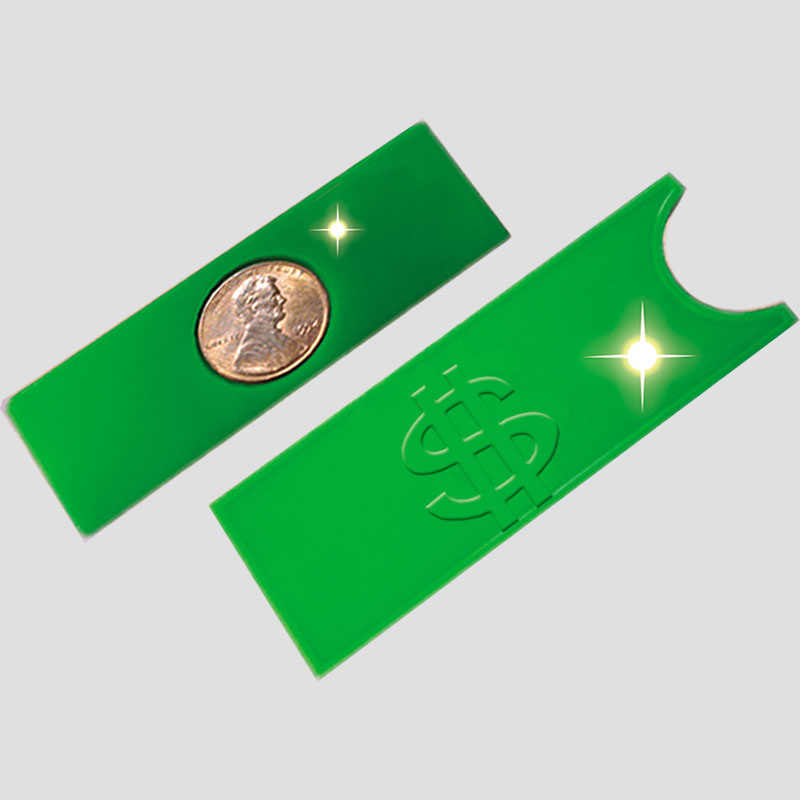 Your money transformer can do all sorts of cool tricks. It can make coins vanish and reappear and even change one coin into another. Take a look at both parts of the prop. You will see that one part has a circular section in the middle of it. It is in this circular section that you will put a coin later on. This part of the prop is called the slide. The slide fits into the opening of the base part of the prop, with the dollar sign on top of it. The slide has a secret compartment that is so well hidden you probably didn’t even notice it. It is the circular section itself. There are actually two circles in the slide! Take a coin and place it in the circle and with your finger, push the coin to the left or right slightly until it moves. You should now see the other circular section. Before your show, take a coin and place it in the circle and push it into the secret compartment. Now put the slide into the base and then take it out immediately. If the coin is there, then turn the slide around and put it into the base with the other end first. When you take the slide out the coin should be gone. Put the slide back in this same way and leave it there until you are ready to perform. During your show, take the slide out and show that there is nothing in it. Don’t shake the slide too much or they will hear the hidden coin inside. Now you must do a sneaky but simple move. You must turn the slide around before putting it back in the base. Do this casually as you are showing the props to your friends. Now tell them that you will make money appear. Say a few magic words, take out the slide and there is your coin! Tip it over and drop the coin into your hand. Then put your special props away!

It is just as easy to make a coin vanish as it is to make one appear. Since you know how the Money Transformer works, it will be easy for you to do these next couple of tricks. Before your show, put a coin in the circle and without pushing it in with your finger just put the slide into the base. If the coin is still there when you take the slide out, then you know that to make it vanish, you must turn the slide around when you are ready to perform the trick. If it disappeared when you put the slide in, then simply turn it around, so it appears again. You are now ready to make the coin vanish for your show!

3. CHANGING ONE COIN INTO ANOTHER

To change one coin into another, all you have to do is put a coin into the secret compartment and leave it there. During your show, display another coin and put it into the slide, making sure you know which side to put in first. Now when you are ready to perform, the first coin will change into the hidden one!